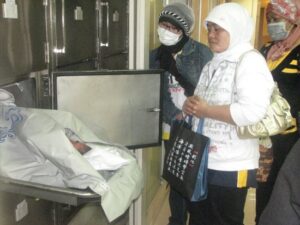 Some BMIs have seen Marmi’ corpse in Taichung Hospital, Taiwan. It was extremely tragic. There have been 2 months, but the government embassy (KDEI) has not come yet to process of returning the corpse.

Problems keep criticizing government representatives’ performance in the countries where Indonesian Migrant Workers are placed. After Indonesian Embassy of Malaysia was criticized due to the corpse of one of the migrant workers which has not been returned to Indonesia. Marmi, a migrant worker from East Java died in Taichung, March 2012, but until now, her corpse remains in Taiwan.

She had been worked in for 6 years and her contract would end in August 2012. When she was working in Taiwan, this migrant worker had never been sick. On Saturday, 10 March 2012, Marmi asked for permission to her master to go to Taipei. After returning from Taipei, she suddenly told that she had a stomach ache. Then, her master took her to see the doctor. After examined, the doctor got her taken to Taichung Hospital. But before they arrived at the Taichung Hospital, she died.

Marmi has an elderly sister named Tutik which also works Taiwan, in Chang Hua areas. At 1 a.m. Taiwan time (10/03/12), got a call from the agency recruiting Marmi by using her mobile phone and told her that Marni has died. The following day (11/03/12), Tutik was fetched by the agency to Taichung Hospital. After arriving at the hospital, the police had been there along with her master. Then, the team from the attorney of Taiwan came and asked for immediate autopsy to ensure what caused Marni’s death.

After the examination results were done, the doctor team explained that she died because of her kidney cancer rupture and caused bleeding in her stomach. To respond to the examination results, Lili, an Activist of BMI Al-Hikmah Community in Taiwan immediately reported the case to an Embassy Staff (KDEI) named Feri.

Before Lili contacted Feri, the family party in Indonesia had ever informed. PPTKIS which has recruited her agreed to help becoming the endorsee from the family with the total cost 16 million to process Marni’s body return. This information was then delivered by Lili to Feri.

What becomes the questions asked to the Head of KDEI is that why was the process of returning Marni’s body not endorsed and processed by the KDEI? Why was the authority then given to the private party? Who is actually more competent regarding to the mechanism of the process of corpse returning from Taiwan? And why did KDEI seem like washing their hands regarding to the effort to return migrant worker’s corpse? Was it actually the public service mechanism to return migrant worker’s corpse in Taiwan?

Whereas, the fact showed that Marmi, when she left for Taiwan, used the Re-entry Direct Hiring process, did she have no relationship with PPTKIS anymore? Besides, from the beginning there had been an indication indicating extortion done by the PPTKIS due to the attempts to return Marni’s corpse.

The extremely tragic thing regarding to the bad performance of KDEI could be seen when the troop of Lili and Indosuara Taiwan Activists along with Tutik (Marni’s elderly sister) was allowed to see Marmi’s body (18/03/12). To the officer Tutik asked whether there had been any representatives for the Government of Indonesia who saw Indonesia Marmi’s body. Ironically, the officer of Taichung Hospital answered “No, just you!”, hearing the answer of the officer of Taichung Hospital, questions whether the KDEI, after receiving the report regarding to a dying migrant worker, did not need to check the accuracy upon the corpse, reappeared.

For your information, the cost charged for any corpse staying in Taichung Hospital is 400 nt or about Rp.130.000, – a day, and Marni’s corpse had almost been in the hospital for about 2 months with o process done by the Government of Indonesia. We do not know how long should the body of the migrant worker should be in the hospital? Who will be responsible for the cost charged in Taichung Hospital and who will return the body of Marmi?

Because until now, Marni’s family remains expecting that her body will not be cremated because it is not in line with their belief as a Moslem. Hopefully the officers of the Government of Indonesia read this writing and then policy is decided immediately.

Accident at Work: ATKI Taiwan Will Write to the BNP2TKI