BANYUMAS. A big smile grows in merry her face. Rakinah (57 years old) may living in her utmost peaceful mind surrounded by her 3 lovely children grandchildren, make home feels homier. This kind of situation may never being captured in life of this woman who lives in Cihonje village, Banyumas, if she was discouraged to turn on the scales when her husband passed away. Left her children while they were an elementary school student.

To re-married? Or to be at work for the sake of future education of her beloved children? Both are risky, indeed. To find another soulmate and being married again may easier, but its still in the air, whether her future husband are willing to paid her children tuition until high school, as she expected. To be at work may enables her to fund education of her children. But consequently, she must stay as a widower for a longer periods of time.

This woman was in a big dilemma of deciding whats best for her. But in the end she needs to pick her choice, because it’s the consequences of life that she needs to decide on some big and hard decision. She ended up to be at work. Her children are being taken care of their grandparents. This woman decided to left her beloved homeland and traveled to Saudi Arabia to work as a housemaid.

Time flies while Rakinah keep her commitment to support education of her children, at least to finishing high school. She turn a finger to pursue her big dream.

While other work abroad to build a fancy house, Rakinah left her house as it seen when her husband still alive, there’s n o such thing as brick wall. She was focusing on another invaluable investment, a better education for their children.

Her neighbor often criticized her decision to send out her children on a high school in a downtown. They said it is like throwing herself to be a poor since the education cost a lot. Nevertheless, Rakinah was never take those kind of critics seriously. She survived on her bamboo house, as long as their children may have a proper education.

Ten years later, this woman smile. No matter how hard facing a harsh Arabian overlord, it is incomparable with the fact that all of her children successfully finishing their higher education. Her eldest child who talented to foster, currently work as a spiritual mentor in a government department. While after finishing accountancy study at vocational school, her second child, running a grocery store business in her house. Her youngest son who always interest to machinery, after having electrical engineering training at his vocational school, he is opening a TV and refrigerator reparation services.

This aged woman still keep her smile up. Enjoy the results of years of her hard work under the command in the King Fadh nation. If she was deciding to re-married, her life today may not be the same. Like a famous Indonesian figure, Hamka, Rakinah said: “Something which make us happy from our children is when they were a funny kid, made a success life when they grown up”.

In the end, whether its a university lecturer or even a kindergarten teacher, either they the overlord or the housemaid, those who own the capital or jobless, they are all obliged to make a great decision in order to be success!

And in 2011, Rakinah successfully make their children experienced a better education than her, whilst approximately 4900 children in  Banyumas who are in the age of student in junior high, unable to afford education. (SusWoyo) 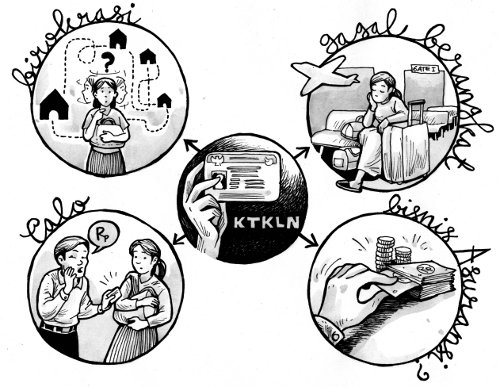