Regeneration of Administrators of ATKI in Taiwan 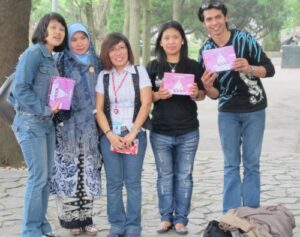 On Sunday (15/04/12), activists of ATKI in Taiwan held a leader selection in Park 228, Taiwan. The event was also attended by representative of Asia Pacific Mission for Migrant (APMM), representative of Taiwan Association of Indonesian Workers (IPIT), and Taiwan International Workers Association (TIWA).

Organization is an important instrument in developing solidarity and strength of migrant workers in their placement countries. Despite the limitation of the service period of the administrators was for 2 years, sometimes they have to go home before their contract period is over. However, this doesn’t break the spirit of ATKI’s activists in Taiwan.

“By organizing, the BMIs in Taiwan will share their knowledge. The organization will become a space to build solidarity, fight for and defend the rights of BMI. Besides strengthening organization, ATKI in Taiwan must aldo network with various parties to broaden the campaign regarding the problem of BMIs in Taiwan” said Atin Safitri, elected Head of ATKI in Taiwan who was appointed for the position for the second time.

ATKI in Taiwan continues to become a dynamic BMI organization, become a space to face various issues, whether issues in Indonesia, with government representative in Taiwan, issues at workplace, PPTKIS, agencies in Taiwan, employers, etc. Due to that, ATKI in Taiwan has various activities, starting frm discussion, seminar, and case handling, to demonstration to demand the return of the rights of BMI.

During the election of head of ATKI in Taiwan, there was a poetry reading by Dwi (25) an activist of Yi Lan area. The poem read was titled Indonesian Women, a poem about women who had been suppressed and exploited for centuries. A poem titled the Fight of Mother Kartini was also read by Hani (26), an activist in Tai Chung area. The event was closed by a game of guessing prizes and taking group photograph which were hosted by Anie Inayah (25), an activist of ATKI in Taiwan in Tao Yuan area.

2 komentar untuk “Regeneration of Administrators of ATKI in Taiwan”