Thousand of local and migrant workers from many countries who earn living in Hong Kong gathered in Victoria Park early in the morning (01/05/12). Despite the hot weather and cloudy rain across the sky, the spirits of workers are scorching and high.

Many kinds of cheers are being sung subsequently. Migrants from Philippines, Nepal, India, Sri Lanka and of course Indonesia took part on this demonstration on the remembrance of International Workers Day or so called ‘May Day’.

“Increase minimum wages to HK$ 4.000 and diminish tax” became one of demands of the migrants. Central Government Office at Central, Lee Chuk Yan from Hong Kong Confederation of Trade Unions (HKCTU) who is also a Hong Kong politician also addressed his speech and spirit to the demostrants.

No less than 6.000 workers are begun the long march at 2.30 p.m. Hong Kong local time, guarded by police officer to the Hong Kong government office at Central.

On 5 p.m., all demonstrants gathered before the Central Government Office. A mini stage was established at the venue.

International migrant’s day which commemorated annually on 1st of May, also celebrated by many people across the world including Hong Kong. Hopefully, this remembrance could drawn attention from government official to put their concern on the demands of workers. Workers have the same rights, in particular, rights to get a proper salary and protection also good service from the government.

Hopefully, the future of workers could get better and there will be no worker who will be sacrificed for the sake of interest of the rich and employment mafias. 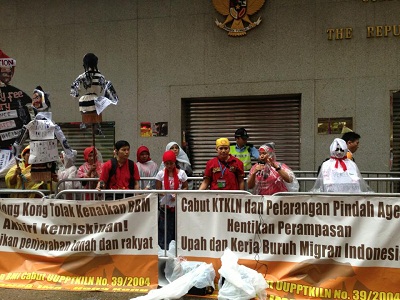