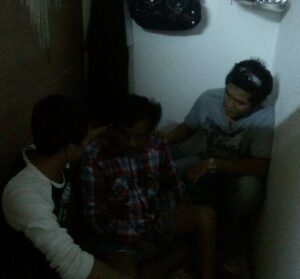 Story of Johra bin Sueb and Munjinah binti Martasari, a wife and husband from Begor village, Pontang, Banten Province who worked together as Indonesian migrants workers in Saudi Arabia. Johra and Munjinah were ever sheltered by Agus, a migrant in Jeddah, but they were being expelled by Agus landlord while Agus out of house.

“Munjinah, Johra’s wife, called me and sobbed. She told me that they were being expelled from Agus place, while they don’t have any money then,” said Jamil Lee, a friend of Johra (24/01/2012).

Story about Johra dan Munjinah spread quickly amongst Indonesian migrants in Arab. Jamil Lee and other Indonesian migrants finally came with the idea to help this couple. The lack of freedom and uncertain working hours was the greatest challenge for the fundraising process.

On Wednesday (25/01/2012), representatives of Indonesian migrant union in Jeddah visited Johra and Munjinah’s new place in Rabuwah, Arab. Johra was helped to sit in the chair and hold his pain in a tiny 1,2×2 meters room. The meeting was basically discussed about fundraising attempts in order to return Johra back home. Visits shall be done gradually notwithstanding the fact that their working time is barely fixed.

Phone credits donations are targeted to donators who couldn’t directly send cash money. Until January 26th 2012, the amount of donation has reached 1290 SAR or approximately IDR 3.144.400.

Munjinah, Johra’s wife pleased the donation. “I really grateful that many of our friends are care to help us. I really don’t have any idea of what should I do, I am just a woman, you know,” Munjinah sobbed.