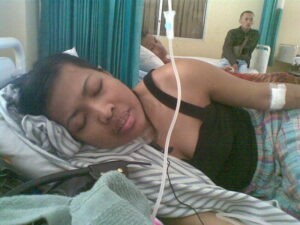 Condition of Lia binti Sanali, ex-migrant worker in Arab who is currently hospitalized in Rumah Sakit Polri Sukanto Kramat Jati Eastern Jakarta for her kidney failure disease is still wretched (22/01/12). Lia, migrant worker from Wanagopa, Kerman village, subdistrict Warureja, Tegal, Central Java, suffered on 4th stadium of kidney failure. She has to do dialysis twice a week.
“Will dialysis will be enough for her or there will be any possibility for her to surgery and get a kidney donor? Family has no received any confirmed action from hospital, company agent also government,” said Sugiono through phone call.

Lia’s condition is currently demands her to get further treatment at the Central Hospital Rumah Sakit Dr. Cipto Mangunkusumo (RSCM) and find her a kidney donor. However, according to her working contract, it is a challenge to move Lia to RSCM as this hospital doesn’t have any agreement with either government or PT Fajar Semesta Raya Perkasa, Lia’s company agent, regarding migrant workers medication.

“My employer in Jeddah was promised to help me fund my medication, but I haven’t heard any confirmation about this,” said Lia when Contributor of Indonesian Migrant Worker Resource Center visited her at the hospital.

Eventhough some of her friends are put their attempts to ask Lia’s employer to fulfill their promise to help Lia’s medication in the amount of 40-45 million IDR, that amount wouldn’t compare what she is currently needs. According to Efi, staff of RSCM, an operating surgery to replace kidney would cost her at least 500 million IDR or even more.