BANYUMAS. A fact related to economic habit of Indonesian migrants has just being exposed. According to studies of Sociological studies Universitas Jenderal Soedirman (Unsoed) in 2 migrants source regions which are Wonosobo and Banyumas on 2010, it is claimed that economic remittance of Indonesian migrants are mostly aimed for consumptive, investment (future saving), mortgage payment and some of them use it on productive way.

Using their money in a consumptive way, for example to fund their living cost, pay debt, wedding cost, buy gadgets and many others. While investment used for buy a house, land, pay child tuitions, even for their own education. Some of them using money in a productive way by building a business, such as hand phone mini store, buy a public transport armada, as well as using it for religious purpose.

This circumstance appeals Dr Tyas Retno Wulan, Head of Gender, Children and Social Studies of Universitas Jenderal Sudirman to held a workshop on migrants empowerment. Through this workshop, migrants may raise their awareness on working abroad as investment and avoid them to return to work abroad.

Workshop held on December 15 2011 at Universitas Jenderal Sudirman campus building in Purwokerto which also being a remembrance of the international migrants day. This event participated by 40 ex migrant workers from Gumelar dan Sumbang sub-dictrict, Banyumas whose mostly are members of Seruni, a Woman and Migrants Activists Society.

“I find this workshop very useful. I hope I could build my own business in the future”, said Sri Susilowati, an ex migrant workers in Taiwan from Gumelar sub-district.

Head of Social, Manpower and Transmigration Department of Banyumas, Kartiman, also supports this event. Kartiman hopes that opportunities for goods and product marketing would enhance through this event. This full day workshop was facilitated by Irma Suryati, owner of Mutiara Handycraft, a company from Kebumen which earned many achievements, both national and international. This event was officially opened by Head of LPPM UNSOED, Totok Agung. (SusWoyo) 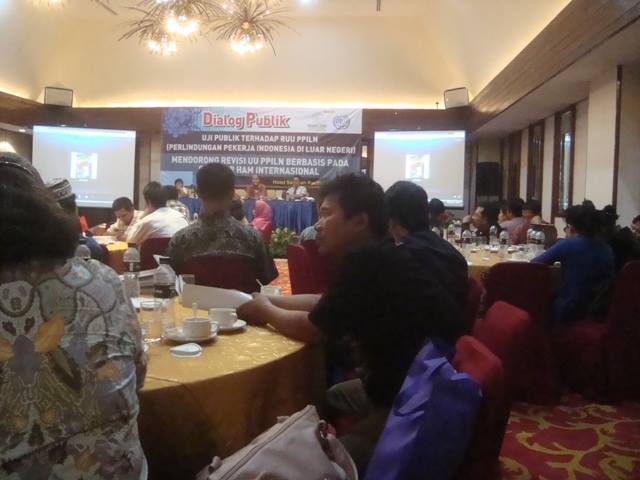